This is the fifth part of a multi-part conference write-up.

Let me take up the narrative again from dinner. Dinner, held in the “Chapel,” of the Foresight Centre, the former hospital chapel. The buffet was laid with curry and rice, sandwiches and crisps and dips, and several different sorts of sweet cake, and also wine and fruit juice. 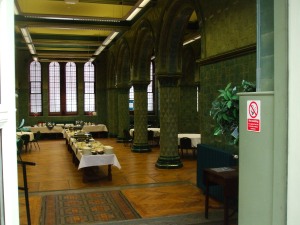 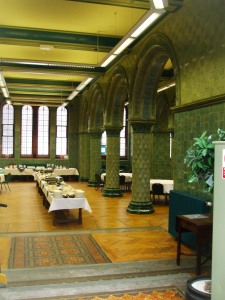 Not being a curry fan, I made a dinner out of sandwiches and dessert, and snagged a seat at a table which also held Dan Franklin, Zoe Johnson, Cara Sheldrake, Penelope Goodman – I think Sarah Miles and Liz Gloyn also – and Sophia McDougall. The acoustics bid fair to be absolutely terrible, with all the voices and clatter echoing back off the tile, and I missed most of the interesting conversations at the table in part due to eating myself.

(Sophia McDougall is both shorter and younger than I’d expected her to be, somehow. But expressively intelligent, and also witty.)

About the only thing I remember talking about at dinner was McDougall’s The Rape of James Bond – I mentioned that I admired her for writing it, and she said something about how surprised she was not to have received rape threats over it.

(A sad fact of the internet, this surprise.)

As the eating was winding down, Tony Keen got up to thank everyone involved in pulling off the conference. And then Andy Sawyer stood up to present tokens of appreciation to the two plenary speakers present, Sophia McDougall and Nick Lowe. The official unofficial symbol of Liverpool, adopted while it was “City of Culture,” can come in small, wrapped boxes… which the plenary guests accepted with trepidation somewhat reminiscent of people who are handed a live handgrenade and told not to drop it. (Perhaps I exaggerate for effect.)

Sophia McDougall kindly let me take a picture of her “Liverpool Lambanana!”

I’m pretty sure I’m not the only one who had no clue what the hell a lambanana was, prior to the conference dinner… Personally, I think it looks a bit eldritch.

We had to be shooed out of the chapel, due to much talking (O, had I only brought my notebook to dinner) and while many people headed off to the Phil, I had drinks with Dan and Zoe until zombification of exhaustion took over.

So to bed, to sleep! And wake refreshed for Sunday morning…

15 thoughts on “SFF/Classics Conference, Liverpool, Part V of Many”