Read for review. It’s a very interesting little piece of sword-and-sorcery, albeit perhaps not entirely to my tastes.

This is more travelogue than mystery. Very good travelogue. Weak on the mystery.

Jaime Lee Moyer, Against A Brightening Sky. Tor, 2015. Copy courtesy of the publisher.

Read for column. Third and last in Moyer’s trilogy, set in early 20th-century San Francisco. Moyer has a compelling touch with characterisation, but many elements of this volume sat ill with me – it’s a little too romantically inclined towards the aristocracy of pre- and post-Great War Europe, and inclines towards Evil Bolsheviks, while not feeling as rooted as I would prefer in the actual tenor of the era (although that may be mere European bias on my part: I don’t know much about America in the years immediately following the Great War).

…while being too sick to think. I may have forgotten one or two.

Lesbian romance/spy thriller – with a plot that belongs in a comic-book, rather than a serious thriller. A journalist, a drug that turns people into zombies, mind control, and an assassin whose memory gets erased and reprogrammed in a manner reminiscent of Joss Whedon’s awful Dollhouse. Shaken, not stirred. It’s… well, laughably entertaining is a good way to describe it?

Post-viral-apocalypse lesbian romance. This? This is bad, structurally, logically, in terms of characterisation, in terms of worldbuilding, and the prose isn’t great either. Some rapetastic stuff about a post-apoc religious culty community, and a resolution that’s pulled out of thin air and makes the whole rest of the novel make no sense. (If religious culty community’s #2 guy is Sekritly On The Side Of Angels, why didn’t he poison/shoot/otherwise dispose of rapetastic murderous religious cult leader guy and take over long before? Or leave.)

At last. This is solidly decent work – the second book in a series about art smuggler Cantor Gold, where I haven’t read the first. It works on its own. Set in 1950s New York, it has a very noir tone: in fact, I’d say it is noir: murder, trouble from the law and the mob, a missing art masterpiece, a lot of beautiful women, some of them heartless. What makes it interesting – I’m not usually interested in American noir – is the fact that Gold is a lesbian.

A couple of years ago, I read Wright’s first novel, Pyramid Waltz, and I think I said it had promise. It definitely appealed to me. But she hasn’t lived up to that promise since. This is particularly noticeable with Thrall, a standalone novel in a new fantasy setting.

The prose is rough but serviceable, and the characterisation is appealing, but the worldbuilding lacks depth and detail – the world doesn’t feel properly lived in, doesn’t have the grit of telling detail – and structurally, the narrative feels weak and rushed. There are the bones of a good novel here, in a scattered, disassembled fashion, but they don’t hang together. And it doesn’t have enough meat.

Still, it does have normalised queer female relationships and interesting violence.

At The Book Smugglers, Kate Elliott on COURT OF FIVES: Inspirations and Influences.

At Tor.com, Caitlyn Paxson on Five Canadian Books to Look for in Fall 2015.

At Tor.com, again, Natalie Zutter on COURT OF FIVES and the Importance of Making Race Explicit in YA Fantasy.

At io9, Remains of “Warrior Princess” Found Buried Alongside Dagger and Sword.

At the Wellcome Library Blog, Monica H. Green on Speaking Of Trotula.

Genevieve Valentine on A WOMAN IN ARABIA by Gertrude Bell,

Phyllis Ames’ Frozen in Amber (DAW, 2015) seemed like it would be perfectly unobjectionable urban fantasy about a shapeshifting lawyer. One appreciates the odd unobjectionable urban fantasy – but this lacks very great appeal, and moreover jangled the nerves within three dozen pages. The narrator, the (apparently white) shapeshifter lawyer and descendant of the head of the law firm, thinks of her Native American (First Nations? I don’t know, he might be Canadian) law clerk,

I often wondered how he excelled at white man’s law and logic.

One finds this to be… unbecoming. One is disinclined to read on, there to potentially discover other random nuggets of even more obvious racism. It upsets the digestion, and disagrees with one’s blood pressure.

And it is not as though there are not a vast quantity of other books in the world. Still. One is grieved to be deprived of the possibilities inherent in shapeshifter lawyer so soon.

I am distressingly ill. There are a distressing large number of deadlines around about. There is also a distressingly large quantity of books, and none of them are the next lot of C.J. Cherryh’s FOREIGNER series, or the next book by Laurie R. King, which is all I really want to read right now… sadly. 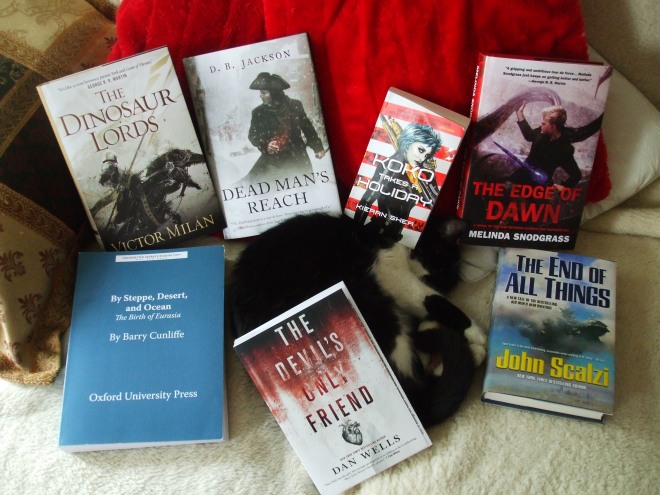 So Titan Books sent me a shiny copy of THE SKYRIM LIBRARY VOLUME 1: THE HISTORIES. I’m not enough, I think, of an Elder Scrolls geek to appreciate it the way it probably deserves – I can see that this would be an interesting resource for people who write Skyrim fanfic, or wanted to run an Elder Scrolls tabletop RPG.

It is prettily designed and elegantly illustrated, and contains the “historical” nuggets one can collect (as books) inside the game. An interesting conceit.

A new column, live over at Tor.com. 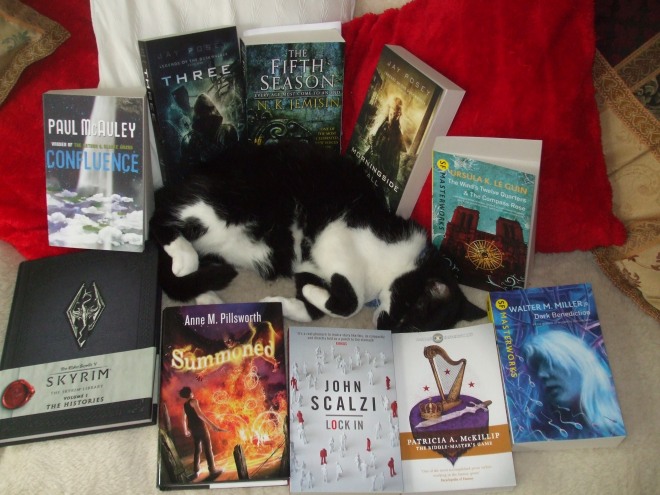 The cat is briefly tolerant.

The cat awakes, and disapproves.

I’ve been quiet around here this week. Even quieter than usual. That’s because I a)got a new bike (WHEEEEEEE GO FAST PEDAL FASTER) and b)realised the deadline for my thesis corrections is… much closer than it used to be.

Quietness will probably continue until September. Unless I change my mind, of course.

And here are the very shiny books. Sarah McCarry’s DIRTY WINGS and ABOUT A GIRL, which I intend to write a column on; and Ilana C. Myer’s LAST SONG BEFORE NIGHT, which I am supposed to review for Tor.com. BOOKS!

Seven? Seven stars, and seven stones, and one white tree.

I confess myself astonished: Oxford University Press appears to have sent me copies of three volumes of poetry: Eleanor Rees’ BLOOD CHILD, Sarah Corbett’s AND SHE WAS, and Mona Arshi’s SMALL HANDS.