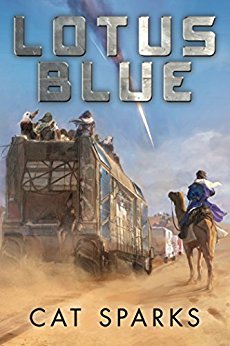 Cat Sparks is an award-winning Australian author. With Lotus Blue, her debut novel published by American imprint Talos Press (and with a gorgeous cover by Lauren Saint-Onge), she’s making the leap to international exposure.

Lotus Blue is post-apocalyptic science fiction with a very Australian feel. Seventeen-year-old Star and her ten-years-older sister Nene are part of a caravan of nomadic traders who travel the Sand   Road, a route that cuts through a ravaged landscape, on the edge of a desert where semi-sentient war machines roam. These, half-human soldiers called Templars, and sealed fortress cities, are among the leftovers from a time before the present age.

Deep in the desert, an ancient and mostly mad AI is stirring, one of the generals that prosecuted the war that ruined the world. When a relic satellite falls to Earth, events are set in motion that lead Star very far from her sister and the life she knew, on a journey across a desert sea. Her journey, and her discovery of secrets about herself that she never knew, intersects with the journey of a Templar called Quarrel — half-broken, his memories confused, his people skills non-existent — who is determined to stop the mad AI general before it can destroy the world even further.

In this world, we see through Star’s eyes, through Quarrel’s and through the eyes of a young thief called Grieve. As well, we have the viewpoints of an old Templar called Marianthe, who controls a small community of outcasts on the edge of habitable land; two young men from a fortress city, one of whom really wants to make their mark and doesn’t give a shit about anyone else; and a handful of other people, including the AI general himself. This diffusion of viewpoints at times gives the novel a rather scattered feel, with some initial plot threads that appear important — such as Star’s relationship with her sister, who kept secrets regarding Star’s origin from her; or such as the role of the fortress cities within the landscape and social ecosystem of this particular post-apocalyptic world — not taken up or developed in any significant way. Sparks creates a vivid world with an interesting post-apocalyptic ecology and some very entertaining Cool Shit, but, while Lotus Blue offers a broad canvas and some really striking potential, it ends up sprawling out on its way to its conclusion, and not quite successfully drawing back in to form a unified whole. It finds its thematic arguments late, and does not press them in a way that brings together all the novel’s threads. There is adventure here, and incident; high stakes and intense emotion. But it feels as though Sparks is setting out the opening volume of a longer work — although nowhere on Lotus Blue‘s cover copy is this suggested — in which the threads of this novel might be taken up and developed further.

Lest I mislead you on this point: there is a conclusion, and an explosive one at that. But it leaves several questions still open and unresolved.

Lotus Blue‘s concern with ecological apocalypse and desert wasteland recalls the Mad Max movies. Its oddball concern with hunting strange things — semi-sentient war machines, in this case — from strange vehicles — ships that sail on sand — brings China Miéville’s Railsea a little to mind. And its concern with technology and a civilisation degraded from a former age recalls any number of science fictional post-apocalypses, but for me reminds me rather strikingly of Ankaret Wells’ self-published duology Maker’s Mask and The Hawkwood War. But Lotus Blue is very much its own thing, and working very much to Australian paradigms, I think — structurally, it reminds me of Australian epic fantasy along the lines of Karen Miller and Jennifer Fallon.

It’s engaging and readable. I found it fun, but I don’t feel as though it really did enough right by me to have me find it compelling — or to encourage me to pick up a sequel, if one should emerge.

(I might have felt differently if it had been a bit queerer. I make a lot of exceptions for work that sets out a better welcoming mat in terms of inclusion.)

This review is brought to you courtesy of my amazing Patreon backers. $3 to the next milestone, guys!